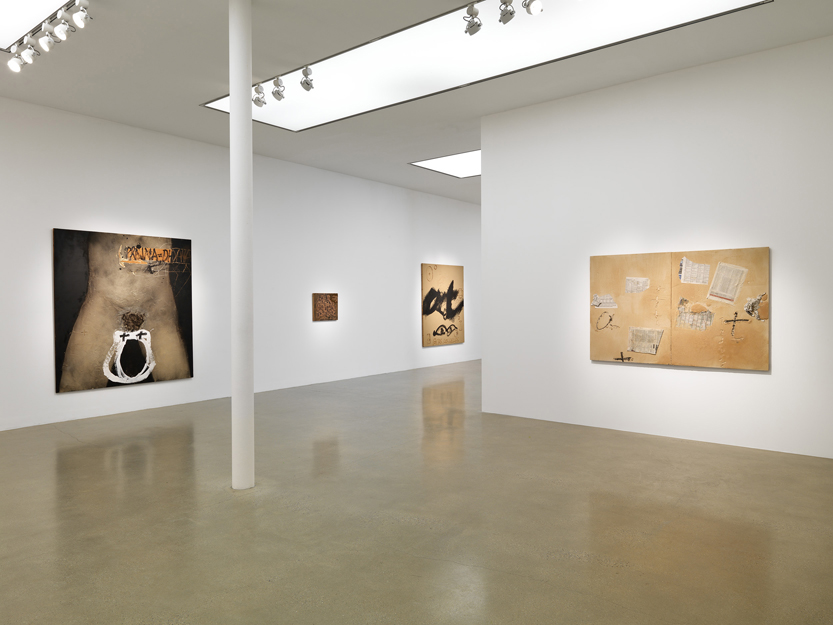 Timothy Taylor Gallery is delighted to present an exhibition by the late Catalan artist, Antoni Tàpies (1923-2012), featuring 11 major paintings created between 1992 and 2009, obtained directly from the estate of the artist.

Timothy Taylor Gallery is delighted to present an exhibition by the late Catalan artist, Antoni Tàpies (1923-2012), featuring 11 major paintings created between 1992 and 2009, obtained directly from the estate of the artist.

Tàpies was a towering presence in 20th century art, coming to prominence in the 1950s and 1960s, exhibiting regularly in the artistic crucibles of New York, Paris and Barcelona alongside peers such as Alberto Burri, Joseph Beuys, Yves Klein and Robert Rauschenberg. Tàpies pioneered the use of sand or earth and other unusual materials in his paintings, creating a form of alchemical magic that connects the base matter of life and the body with the unseen, metaphysical realm.

Language was always an important element in Tàpies’ practice. Repeated ciphers, enigmatic sketches and notations are scored, carved and etched into the paintings’ rough surfaces resulting in shrouded, potential resonances. The letter ‘t’ or a form of cross is present in many of the works and suggests the artist’s initial, a crucifix, a plus sign or perhaps a cancellation. The fluidity of these symbols is core to Tàpies’ work: in Ona-Mar (Sea Wave), 2000, the graphic wave form bears a double headed directional arrow, while the ground in Espai-visio, 1996, bears a series of enigmatic letters and symbols.

In Materia i diaris, 2009, (Matter and Newspapers) an impulsive series of gouged marks and newspaper pages cover the textured surface and allude to the graffitied alleyways of Barcelona. In Escrits i formes sobre materia, 2009, the edges of the work are hectically filled with mysterious words and signs. Tàpies’ adoption of graffiti and handwritten slogans and messages speaks of the social unrest and political struggles of the 20th century, giving his work an abiding connection with the street and the lives of ordinary men and women.

The body and its apparently contradictory associations with both the sublime and the metaphysical, and with dirt and decay was a hugely important subject for Tàpies throughout his career. In Prajna-Dhyana, 1993, and Extensio, 1999, the female and the male body are depicted in graphic and unflinching terms. Nevertheless these works achieve a form of transcendence through honesty, demonstrating Tàpies’ successful distillation of the profound and eternal with the deeply familiar and the transient. At the end of his life Tàpies continued to create often monumentally scaled works, which expressly conjoin the tactile knowable world of the everyday, of language and of the body with the unknowable and the everlasting.

An exhibition, Tàpies, The Eyes of the Artist, curated by Axel Vervoordt, Daniela Ferreti, Natasha Hébert and Toni Tàpies will open in May 2013 at the Palazzo Fortuny, Venice to coincide with the Venice Biennale. A major retrospective exhibition Tàpies from the inside, curated by Vicente Todoli will be shown at the Fundació Antoni Tàpies and Museu Nacional d’Art de Catalunya, from June until October 2013.