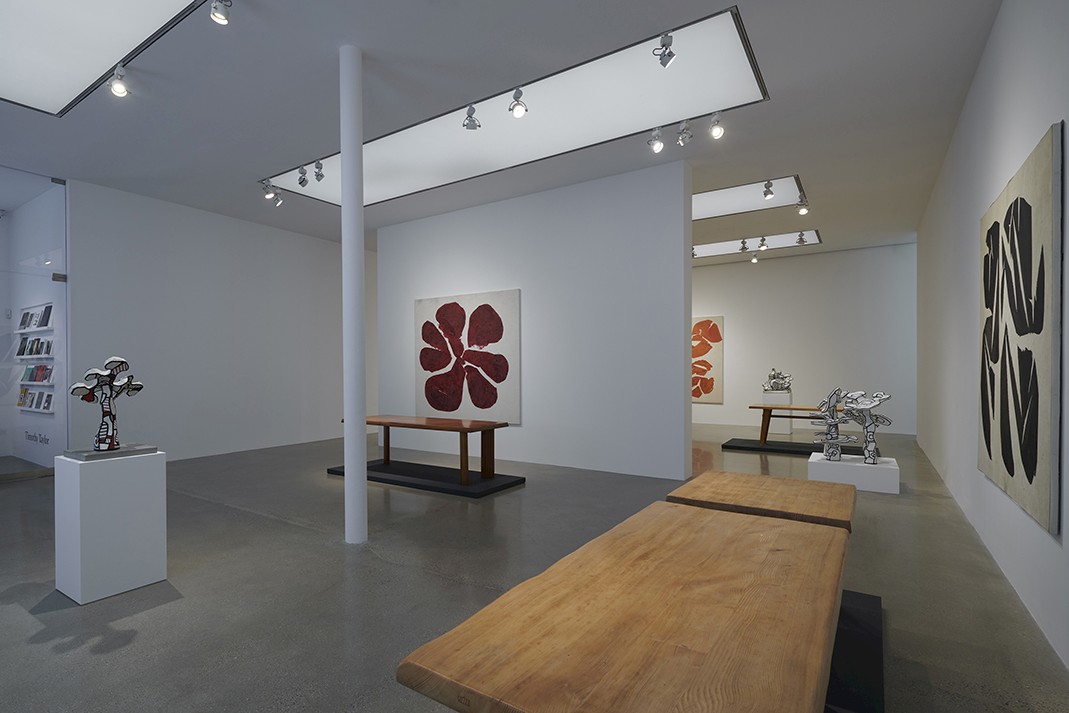 Timothy Taylor is honoured to present Freeform, an exhibition of works by Jean Dubuffet, Simon Hantaï and Charlotte Perriand. Presented is a meeting of art and design through a dialogue of formal structure and organic forms, as defined by three French pioneers working across mediums of painting, sculpture and furniture. 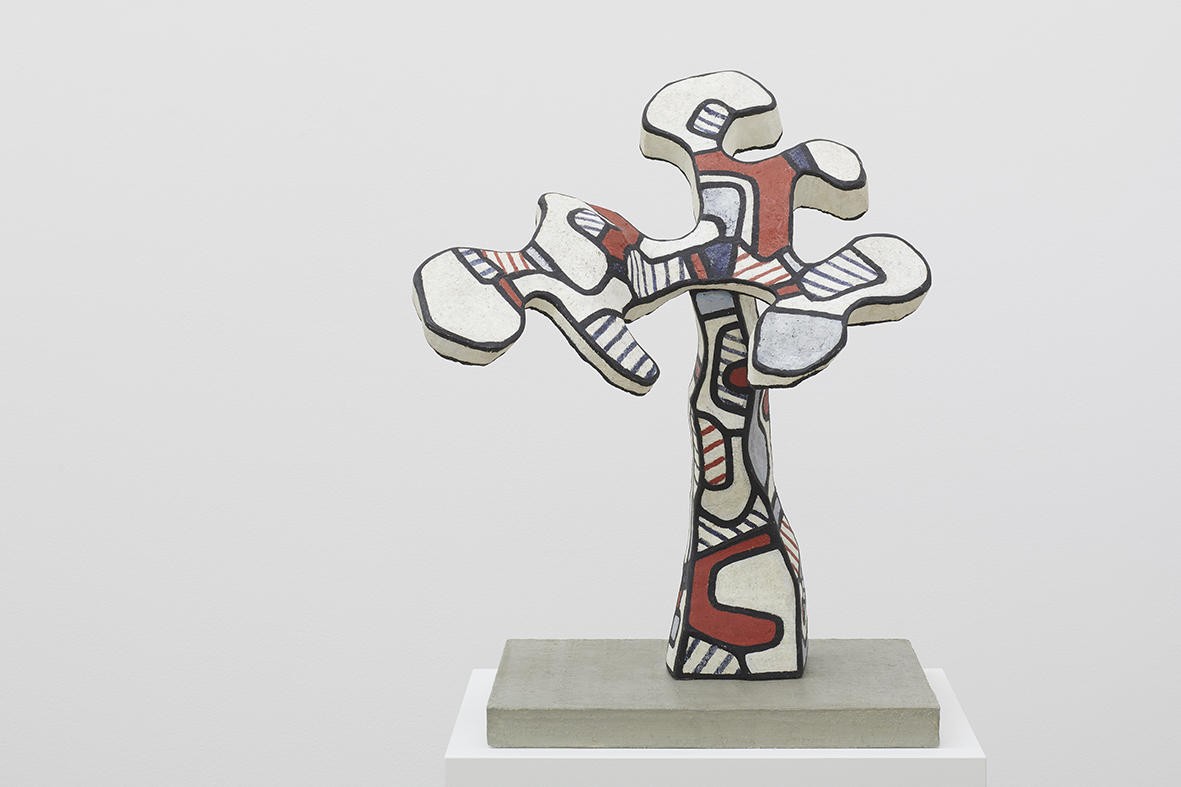 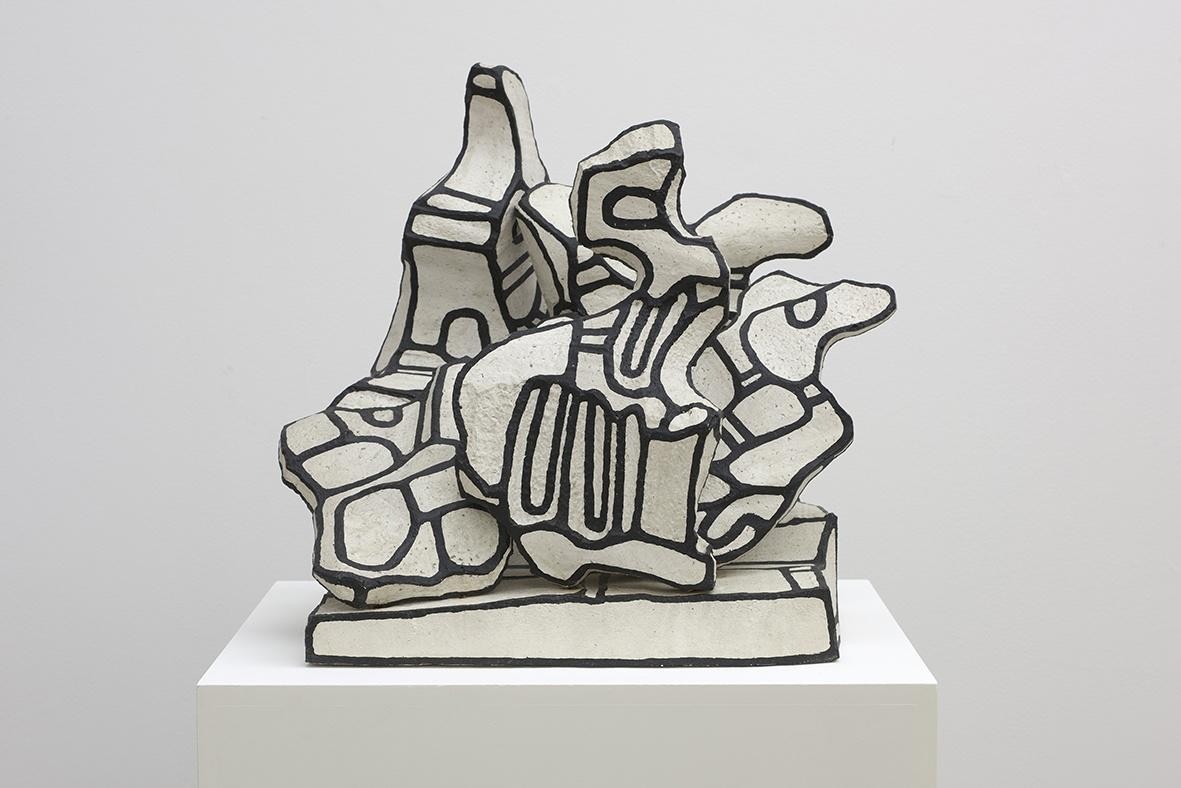 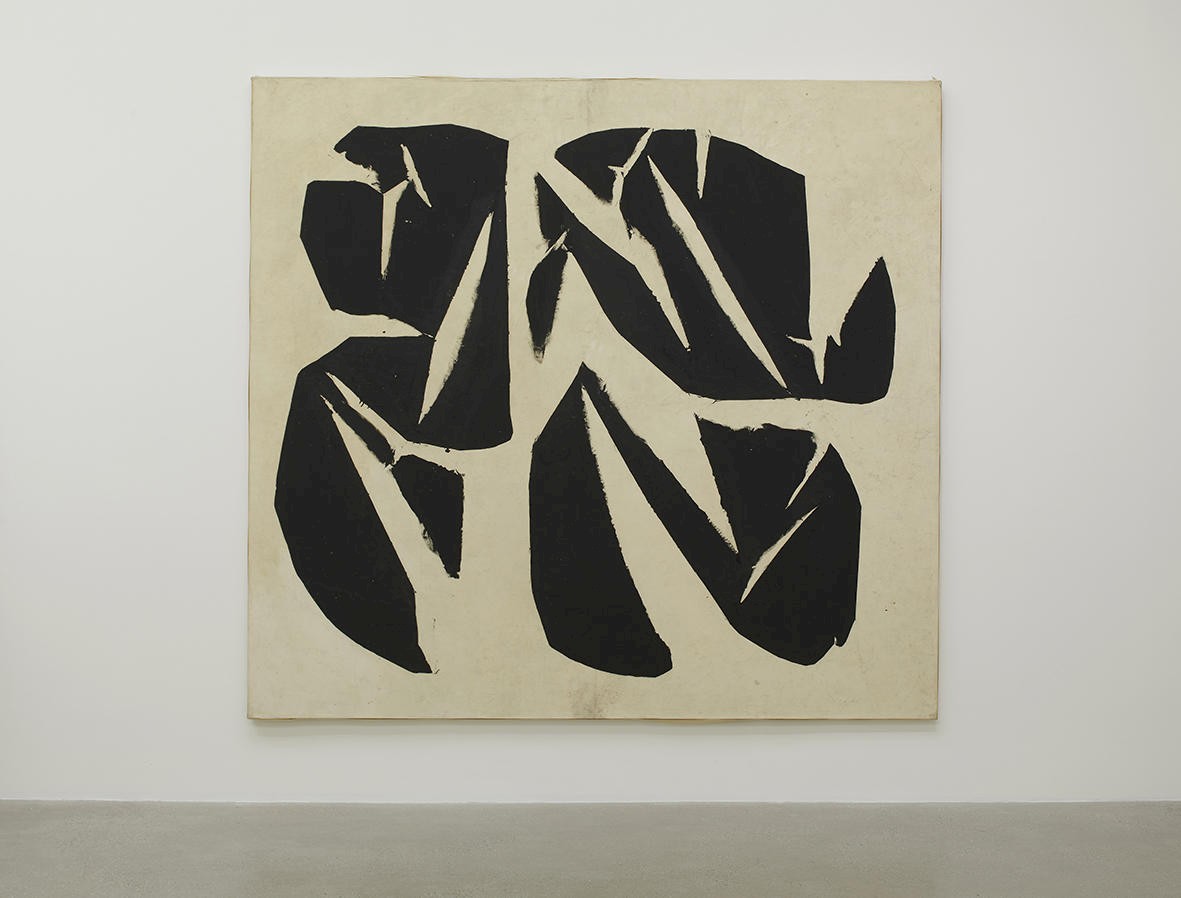 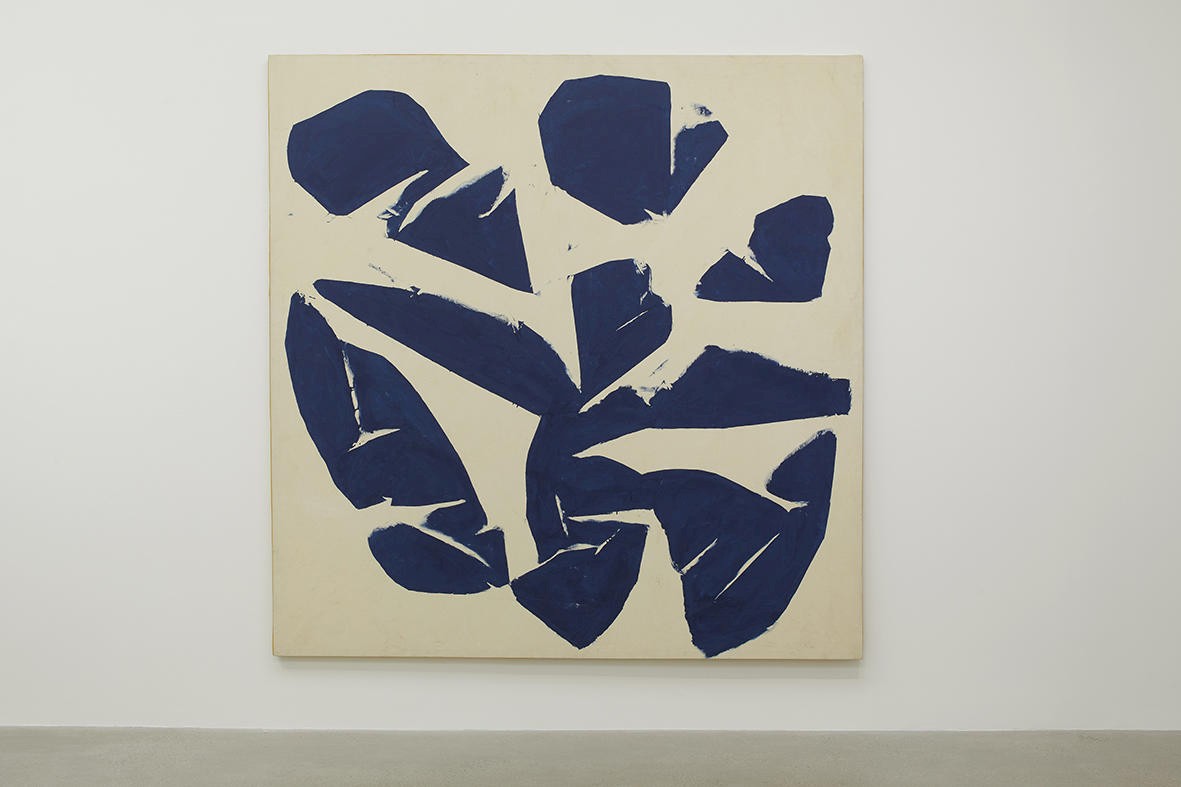 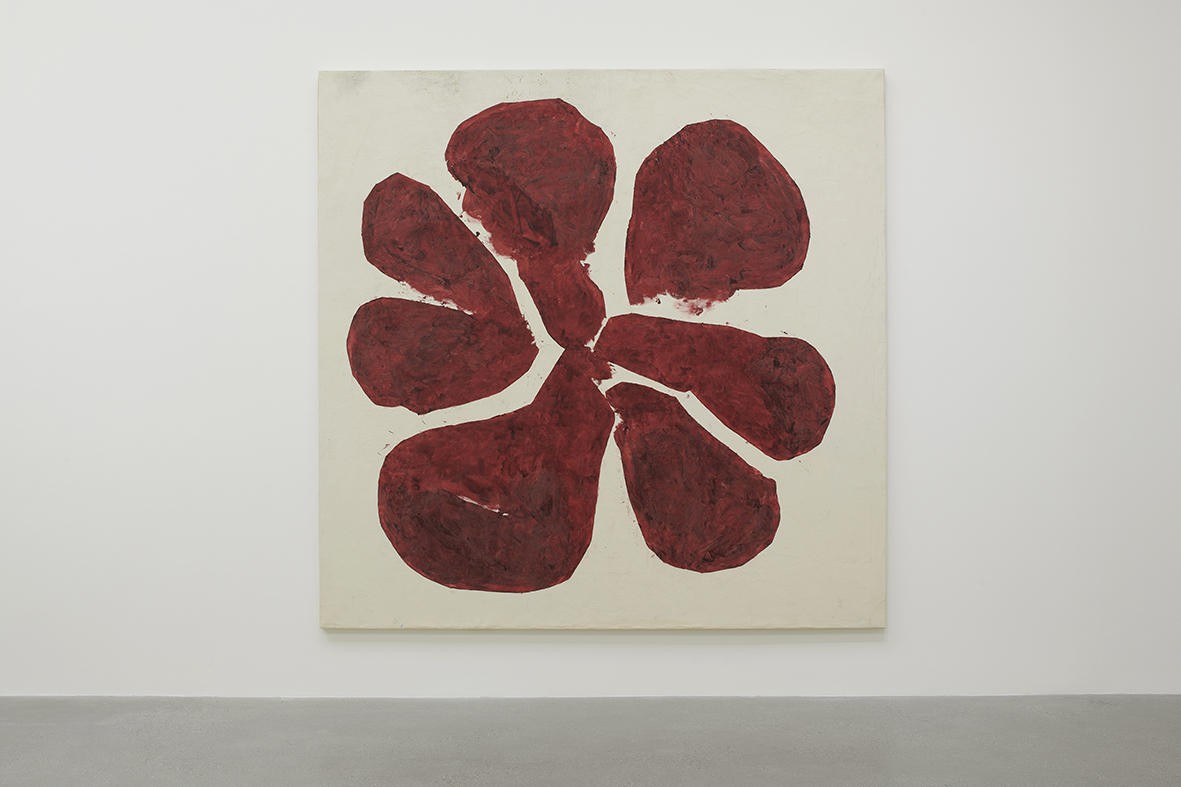 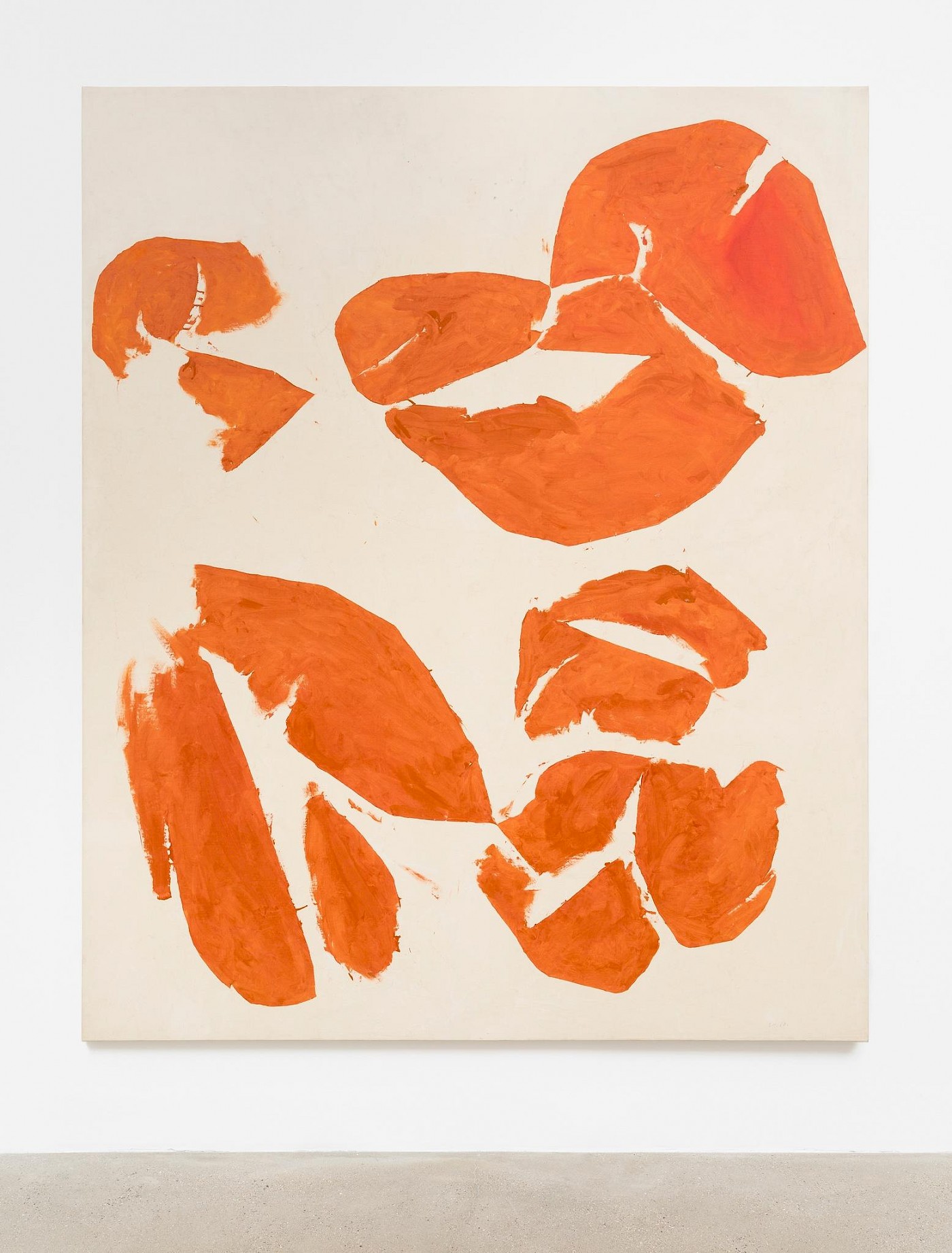 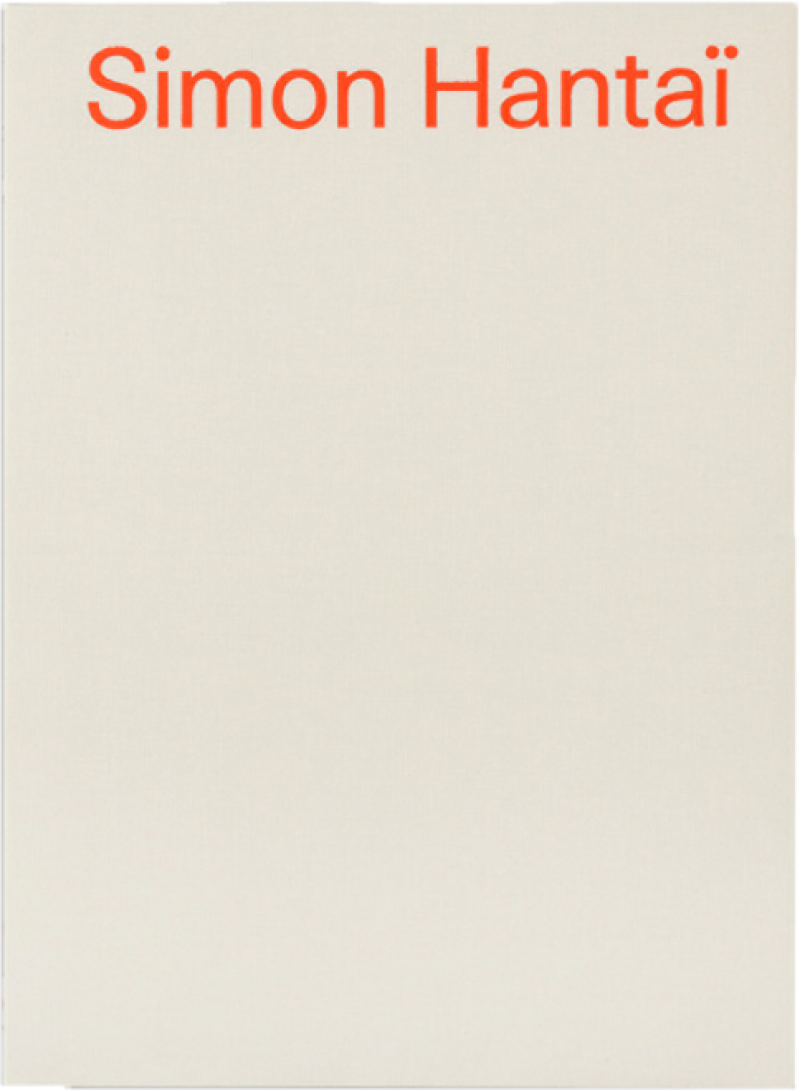 Timothy Taylor is honoured to present Freeform, an exhibition of works by Jean Dubuffet, Simon Hantaï and Charlotte Perriand. Presented is a meeting of art and design through a dialogue of formal structure and organic forms, as defined by three French pioneers working across mediums of painting, sculpture and furniture.

Driven by egalitarian and populist ideals, Charlotte Perriand believed that considered design could have a positive impact on everyday life and, in turn, on society at large. Having rejected the established Beaux-Arts style as a student, Perriand joined Le Corbusier’s studio at the age of 24, which allowed her to pursue an approach to Modernism that brought together both intellectual and material values.

It was following her work with Le Corbusier that Perriand started to develop her ‘Free-Form’ furniture, which harnessed a powerful new approach to design. Taking forms inspired by objects in nature, Perriand generated furniture that was functional, true to raw materials, and responsive to human gestures and interactions. The wooden tables from this period were defined by organic contours, or geometric shapes softened with rounded corners, which avoided collisions in small spaces. The positioning of the legs closer to the centre also took into consideration the ergonomics of people’s knees when sat at the table.

The first ‘Free-Form’ table emerged in 1954, shaped in response to Perriand’s small Montparnasse studio. As Perriand’s biographer Jacques Barsac explains, “the Free-Forms themselves demonstrated a poetic functionalism on the human scale in which each form was rigorously tailored to its use and its production method, while retaining a freedom of composition.”

Whilst Perriand was compelled by conscious design and an awareness of surroundings, Jean Dubuffet’s output was largely driven by a productive unconscious. Each of the sculptures exhibited is connected to Hourloupe, Dubuffet’s longest cycle, which first appeared in 1962 and continued through to 1974. Initially executed on paper, Dubuffet’s adventures in automatism resulted in drawings and paintings made up of multiple cells, where each space comes to life both as an individual element, and as a component within a larger structure.

As the Hourloupe series progressed, the images became more corporeal and quickly developed into vast polystyrene sculptures, a material which Dubuffet favoured as it allowed “the light to emanate from the strata”. Though denying an apparent thought process in the initial design, Dubuffet explained how he wanted to give “monumental dimensions to these unrestricted graphics, these graphics that escape from the paper’s surface which usually serves as a support”. In this translation of works on paper into three-dimensional space, Dubuffet wanted to activate a cerebral response where the viewer was not only in front of but inside the image; being integrated in, and directly confronted by, the forces of fantasy and reality. The resulting sculptures engage with notions of nature and artifice. The clean colours and linear outlines retain a connection to graphic drawing, whilst the physical presence engages a hybrid aesthetic that sits between landscape and architecture.

A defining characteristic of the Hourloupe cycle was the manifestation of a belief that there is continuity between objects, places and figures, much like Simon Hantaï ’s Meun paintings which were developed through his ‘pliage’ technique and resulted in bold, amorphous, images of chance.

In 1960, Hantaï first developed ‘pliage’, a technique where the canvas is crumpled and folded, then doused in colourful paint. Later, as the canvas is unfolded, the work is revealed for the first time, with areas of positive and negative space having been determined by the element of chance inherent to this technique. Hantaï explained how he tied the canvas “in the four corners, big knots, and in the middle of the crude bag a string which strangles it”. Unlike the initial ‘pliage’ works, there is no centre or axis in the Meuns; the form is liberated and left open to interpretation with the bold resulting images hinting at a figure, whilst also carrying the spontaneity of their conception.

The Meun paintings followed a year long ‘silence’ during which Hantaï retreated from the Parisian art world, and abstained from painting. In 1966, a move to Meun - a small village in the Fontainbleau Forest - broke this hiatus through the regenerative impact of a new environment, an unfamiliar studio and excellent light, allowing for a surge in energy to develop ‘pliage’. As Hantaï explained, “folding came out of nothing. You simply had to put yourself in the place of those who had never seen anything; put yourself in the canvas. You could fill a folded canvas without knowing where the edge was. You have no idea where it will stop.”