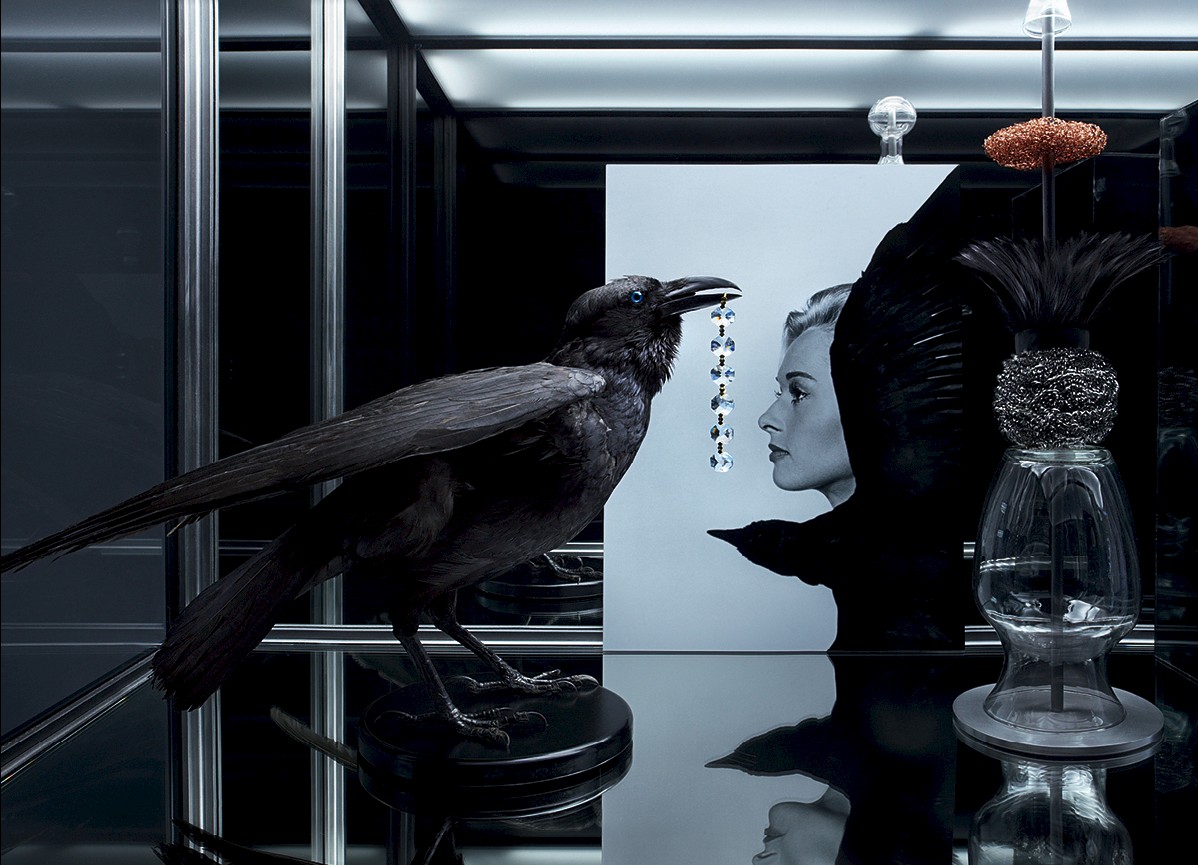 Timothy Taylor Gallery is proud to present the first solo exhibition in the UK by Josephine Meckseper.

Over the past ten years, the New York based artist has developed a practice, which melds the aesthetic language of modernism with a profound critique of consumerism. Employing sculpture, video, installation, painting and photography, she confronts the Western desire for instant gratification with the erosion of personal political agency. Meckseperʼs project is to challenge ingrained perspectives and habits of seeing by employing a proxy retail aesthetic to expose the cracks and contradictions of contemporary living.

Meckseperʼs vitrines function as time capsules or mausoleums to contemporary culture. Meckseper combines upscale consumer products frozen mysteriously within – a black stockinged foot, a sparkling crystal – with photographic references to high art or cinema, alongside faux modernist sculptures and abstract paintings. The viewer canʼt help but encounter these familiar objects as fragile relics of a vanishing world. Suddenly the significance of the lone silver mannequin hand reaching skywards seems obvious – we are looking at a culture that is not waving but drowning.

In Afrikan Spir (2011), the largest of the three vitrines presented here, Meckseper references Hitchcockʼs classic of American Gothic, The Birds, to articulate American cultural imperialism played out through Hollywoodʼs grip on cultural production. Meckseper posits the actress Tippi Hedren as a signature icon of American cold war propaganda in filmmaking. The whole cabinet is suffused with a sense of threat and acts as a modern sarcophagus: a totem decorated with contemporary cultural relics such as scouring pads, glass ornaments and feathers, stands erect beside a stuffed black crow mockingly holding a crystal chain in its beak. Meanwhile, a make-up mirror catches the viewerʼs reflection and brings the outside world into this unsettling diorama.

In an adjacent space, Meckseper will display several of her recent large ʻslatwallʼ paintings, which acknowledge the work of Rauschenberg and Johns in their incorporation of real objects, photographs and silkscreens, while the minimal mirrored surfaces and stacked chrome fixtures echo Donald Judd. These shiny reflective display devices possess a monumental quality, bearing as they do the weight of contemporary US symbols and insignia of power and authority – flags, eagles and car logos. These works demonstrate Meckseperʼs use of the techniques and methods of Pop art, while restoring the antagonistic potential within this genre to serve as a critique of post-war consumer culture rather than celebrating it.

Josephine Meckseper was born in Lilienthal, Germany and lives and works in New York. She received her MFA from Cal Arts in 1992 and prior to that studied at Hochschule der Künste, Berlin (1986-90).

Meckseper’s work will be included in Gestamtkunstwerk: New Art from Germany at the Saatchi Gallery, London this autumn. She has previously exhibited in galleries and institutions including The FLAG Art Foundation, New York (2011); migros museum für gegenwartskunst, Zurich (2009); Nottingham Contemporary, Nottingham (2009); Indianapolis Museum of Art (2009); Museum of Modern Art, New York (2008); Kunstmuseum Stuttgart, Stuttgart (2007) and Tate Modern, London (2006). She has been included in two Whitney Biennials (2006 & 2010) and featured in this year’s Sharjah Biennial.