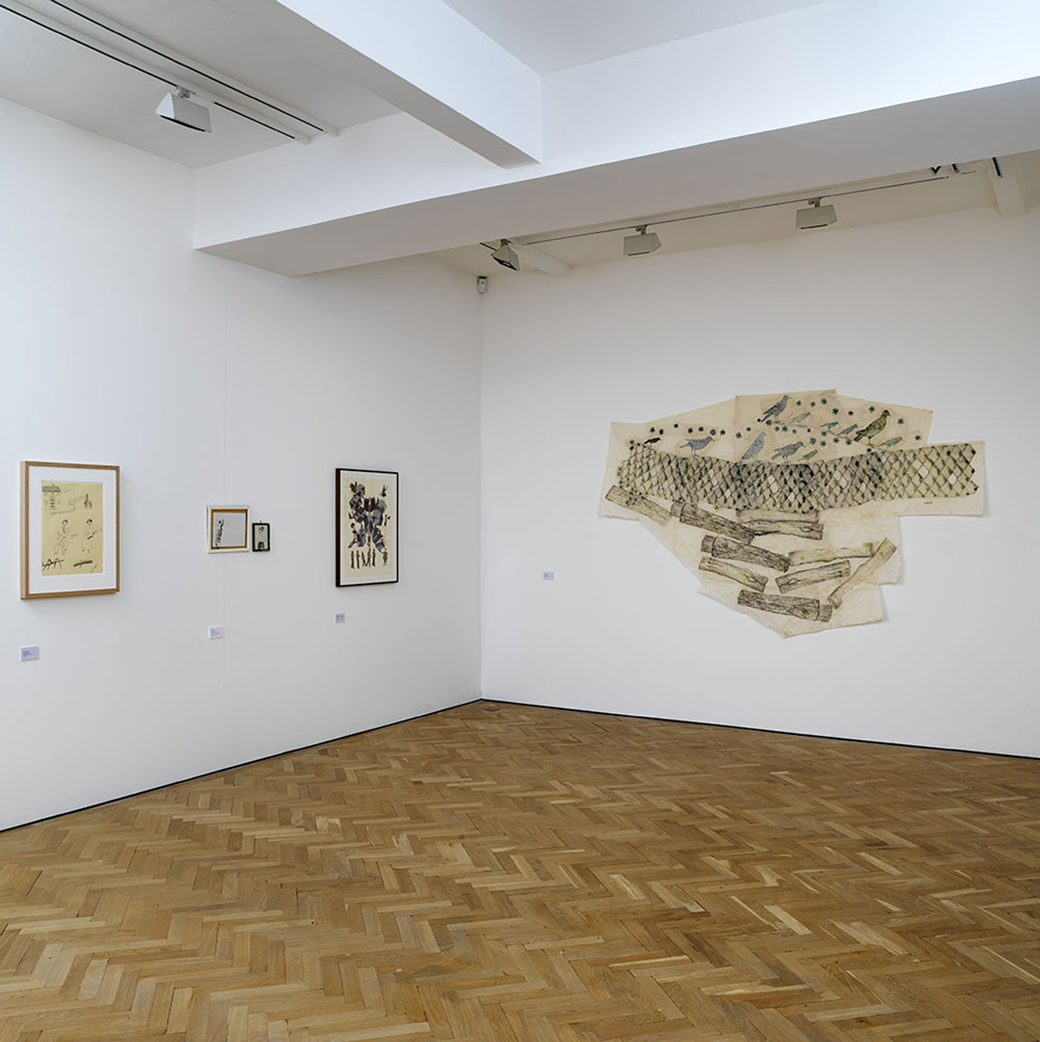 Paper Baglady and Other Stories, 20 June – 31 August 2007, London
Paper Baglady and Other Stories weaves together a rich variety of drawings and works on paper, exploring how drawing and watercolour lend themselves naturally to narrative and storytelling. The exhibition represents a wide range of works on paper, from elaborately finished large drawings on handmade paper, to working preparatory sketches, to mixed media and collaged works. The subject matter is equally diverse, yet a strongly existential content comes to the fore, with masked and obscured human figures, and depictions of the loved and the lonely.
Read more View Philip GustonView Kiki Smith

Craigie Aitchison’s evocative and delicate nature studies hark back to the very fundamentals of drawing practice, while Tim Braden’s Grand Buchess conjures up images of another era, the delicate drawings conveying a sense of nostalgia. Lucian Freud’s drawing The Emperor at the Opera, is taken from a sketchbook filled with poems, drawings and visual and verbal jokes created by the 18 year old artist and his friend the poet Stephen Spender, dating from a halcyon period in North Wales at the beginning of the war.

Marcel Dzama’s drawings combine the folkloric with the surreal in delicate celebratory scenes, while Jockum Nordström’s looser style depicts figurative scenes of everyday life reflecting the humour and absurdity of life in his native Sweden. Meanwhile in New York (2007) Ewan Biggs creates a drawing with completely different means: painstakingly conjuring the soaring image of the Empire State Building with an accretion of hundreds of tiny pencil marks laid out on his trademark grid.

Philip Guston’s 1968 drawing of a stark suited figure in a hood, reveals how Guston exploits the apparent simplicity and artlessness of drawing to create a work with extraordinary existential power. Guston’s hooded figures can be seen as either threatening – reminding us of Klansmen or criminals, or they are themselves threatened and sensitive mortals seeking refuge from the world. Wangechi Mutu’s You’ll always try to get me (2004) uses her trademark glossy magazine collage technique to explore the fine line between beauty and violence, glamour and atrocity that characterises our experience of contemporary media.

James Rielly’s 2006 watercolour drawing Paper baglady, lends its name to the exhibition and is a continuation of his obsession with hidden identities – a theme continued in other works in which figures are masked, or costumed. Victor Man shows two drawings on acetate – which are preparatory sketches for subsequent paintings. Man’s apparently figurative and simple compositions often disguise a deeper, or political subtext. Alexander Gorlizki’s practice rests upon the juxtaposition of numerous distinctive drawing styles: figurative, abstract, doctored photographs, and sumptuous hand drawn Indian miniaturist papers.

Martin Maloney’s Single Women: Won’t Somebody Dance with Me, Start Half a Romance with Me, is one of a series of large scale drawings that the artist created in 1997, of couples and single people. In this work, a wistful young woman looks out at the viewer, summing up all the hope and despair of the dancer waiting for a partner. Saki Satom creates more conviviality with her family groups of anthropomorphized household objects – plugs, computer parts, remote controls.

In Kiki Smith’s Wildfire (2006) handmade paper in collaged sections demonstrates the importance of the physical and tactile in building up atmosphere and particularly in her drawing. Andy Warhol’s Male Head (1950) is a remarkable early drawing, full of energy and life, the image built up with short dashes of pencil.
Mailing List
Enquire