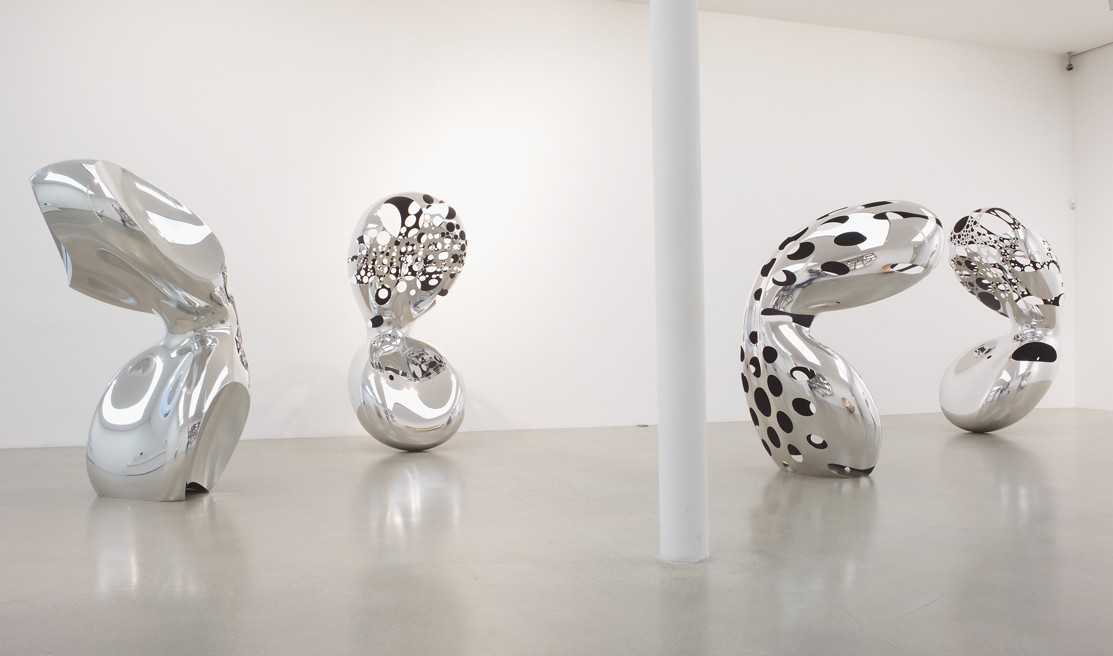 Timothy Taylor Gallery is delighted to present an exhibition of new works by Ron Arad.

Marking the first show at the gallery since it announced sole representation of Arad in the UK, the show will feature nine highly sophisticated, experimental pieces, many only recently completed and never before seen.

Perhaps the pivotal point of the exhibition Oh, the farmer & the cowman should be friends is an extraordinary, imposing shelving unit in the shape of the United States of America, colonizing almost an entire wall of the gallery. Constructed jigsaw-like from individual ‘states’ of stainless and Corten steel, it has a powerful, commanding presence, both playful and provocative.

Continuing Arad’s ever-evolving re-invention of the chair, the Thumbprint and Rod Gomli are jewel-like objects composed of multiple bronze (Thumbprint) or stainless steel (Rod Gomli) rods that shimmer as the light shifts, revealing subtle gradations of colour. The first in their respective editions they are imposing yet intricate pieces whose seductive contours invite the viewer to touch and explore before climbing into their curved centre.

Woven among these works are a series of three unique Bodyguards. Crafted from inflated aerospace aluminium and cut individually before being polished and tinted, they are shown alongside three new and unique Drunk Bodyguards. These remarkable sculptural pieces sway woozily on a single tangent point, balancing poised in mid-air. Although extremely heavy, they appear weightless, reacting to the lightest of touches.

Ambitious and innovative, these works challenge the boundaries of material and form, remaining functional while physically appearing to defy logic. Refusing easy categorization or limitation they are resolutely Ron Arad.

Following his recent critically acclaimed solo show No Discipline at the Centre Pompidou, Paris, Arad will open a re-defined version of this exhibition at MOMA from 2 August – 19 October before reconfiguring it in turn for the Stedelijk Museum, Amsterdam in the autumn of 2010. A solo show will also open at the Barbican Centre from 8 February until 16 May, 2010.

Arad was born in Tel Aviv in 1951 and studied at the Bezalel Academy of Art and Design in Jerusalem and at the Architectural Association in London. He was appointed Professor of Product Design at the Royal College of Art in 1997, relinquishing his post only recently. Before and After Now, a major retrospective of Arad’s work was exhibited at the Victoria and Albert Museum in 2000, a year after the publication of a monograph by Deyan Sudjic, now Director of London’s Design Museum. In 2004, Ron Arad Talks To Matthew Collings was published by Phaidon. Arad’s Architectural projects include the Maserati headquarters showroom in Modena, Italy, and Y’s fashion store for Yohji Yamamoto in Tokyo, Japan, which opened in 2003. In 2004 he began work on the design of Magis’s headquarters in Treviso, Italy and the Holon Design Museum in Israel. In the same year, he participated in the British Pavilion at the Venice Architecture Biennale.