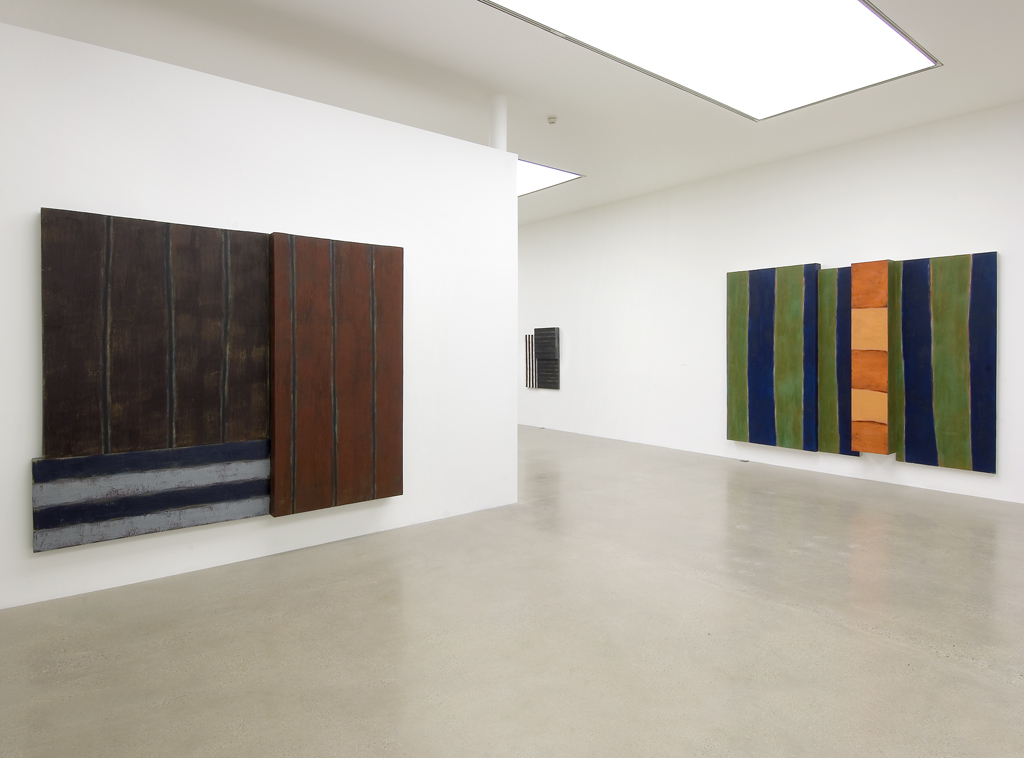 Sean Scully: Paintings from the 80s, 8 January – 14 February 2009, London
Timothy Taylor Gallery is delighted to present an exhibition of paintings by Sean Scully from the 1980s.
Read more View Artist

Timothy Taylor Gallery is delighted to present an exhibition of paintings by Sean Scully from the 1980s.

Rejecting the meticulous, precise gridded paintings he made in the 1970s, Scully’s work took a dramatic turn in the early 1980s. This exhibition explores how he renewed the legacy of minimalist abstraction with the reintroduction to painting of the poetic, the metaphoric and the referential. With hindsight, this determined commitment to abstraction places Scully directly in an unbroken historical continuity with the grand trajectories of high modernism, from Mondrian through to the later poetry of Rothko.

The 1980s saw Scully adopt passionate earthy colours combined with hand-drawn lines and stripes, dense yet luminous brushwork suggesting layers of paint with enticing glimpses of the ground beneath. Using ordinary house painting brushes Scully built up broad panels and stripes, working wet on wet, their handworked quality suggestive of fragility and fallibility. As Sue Hubbard has so rightly observed ‘The humanity of imperfection is woven into the painting’s fabric’.

The revolutionary impurity of Scully’s practice at this point is manifest in The Bather, 1983, in which the central panel clearly suggests a human figure, while the adjoining panels in sensuous black and green inescapably conjure a natural world of terrible beauty. These works are about differences and similarities: the clash and awkwardness of small disparities of scale or depth, and unexpected colour combinations, such as the mysterious elision of black and midnight blue in Swan Island, 1982. Scully himself has described his paintings as personalities – suggesting they can be deciphered and understood to an extent, but ultimately remaining mysterious and unknowable.

The 1980s are also Scully’s most sculptural period; works such as Red Earth, 1985, Heat, 1984 and The Bather, 1983 have a monumental physical presence. All are composed of interconnecting panels, projecting into or receding from the space of the viewer. Scully has said of these works that he liked the idea of paintings that you could not look at in one go, that you had to walk around to see properly, and their three-dimensionality and object-hood is unmistakable. These collisions of panels are all part of ensuring that Scully’s painting, despite its lofty aspirations, is very much connected with the real world. As Scully has observed ‘it is physicality in art that keeps it connected, affirms its connection and its dependence on the real world, on life, on ordinary life’. Scully’s great achievement, realised for the first time in these great works is the reinvigoration of abstract painting with the metaphorical, the philosophical and the sublime, simultaneously delighting the viewer with the primitive and visceral power of pure paint. Ultimately these paintings demonstrate how Scully’s art has probed the very nature of human existence – its pleasure, pain and paradox.

Born in Dublin, Ireland, in 1945, Sean Scully moved to London in 1949. He studied at Croydon College of Art, London, (1965-68), and Newcastle University (1968-72), before moving to the USA in 1975 where he became an American citizen in 1983. Recent solo exhibitions have included: Sean Scully: A Retrospective, curated by Danilo Eccher (touring), Fundació Joan Miró, Barcelona; Musée d’Art Moderne de Saint Etienne Metropole andMACRO al Mattatoio, Rome, (2007/2008). Recent group exhibitions have included: Masterpieces of Modern British Art: Selected works from the Derek Williams Trust and Amgueddfa Cymru National Museum Wales, Osborne Samuel Gallery, London, UK, (2008) and Big Juicy Paintings (and more): Highlights from the Permanent Collection, Miami Art Museum, Miami, Florida and the Metropolitan Museum of Art, New York (2006/2007). In May 2006, a permanent room dedicated to Sean Scully opened at the Hugh Lane Gallery in Dublin and in October of this year he was honoured by the New York Studio School of Drawing, Painting and Sculpture.