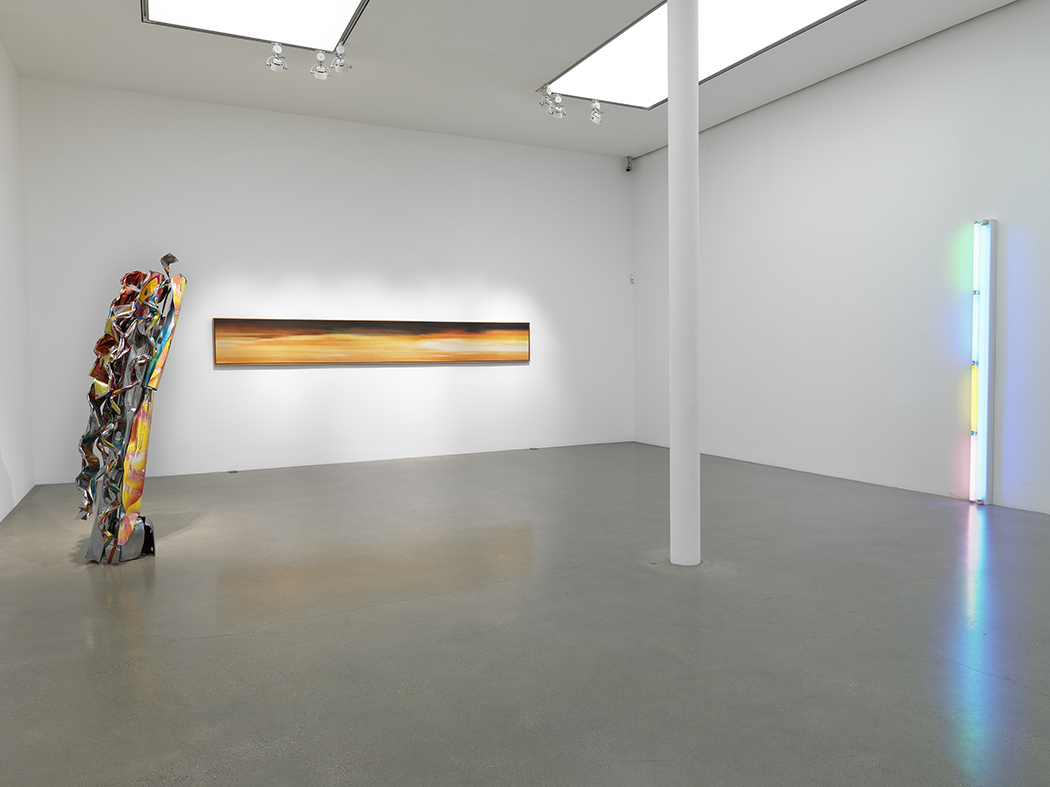 This exhibition looks at various interpretations of, and relations to, the American landscape in the work of key US artists of both today and the recent past.
Read more View John ChamberlainView Josephine MeckseperView Ed RuschaView Kiki Smith

This exhibition looks at various interpretations of, and relations to, the American landscape in the work of key US artists of both today and the recent past. From the cinematic expansiveness of The Nineties, 1980, Ed Ruscha’s blazing sunset painting to Madam Zoo Zoo, 2005, John Chamberlain’s crushed car fender sculpture or Guide, 2012, Kiki Smith’s tapestry of majestic soaring eagles, the exhibition juxtaposes work by artists who have come to represent 20th century art movements such as Minimalism, Pop Art, Conceptualism and Photorealism.

Both Donald Judd and Dan Flavin used industrial and mass-produced materials and techniques in their Minimalist constructions to create works with direct material presence, yet their work nevertheless has an austere and transcendent beauty. Through his adoption of the vast empty spaces of Marfa Texas as the ideal setting for his work, Judd created a very special bond between his work and the desert landscape. Dan Flavin’s installations with commercially available fluorescent tubes achieve an ethereal and sublime beauty through the play of those most elementary of components: colour and light in space.

In contrast, Mustang (L) and Premier (Cross), Josephine Meckseper’s collage paintings of 2008 are a critical commentary on the fetishization of the motor car – so heavily associated with a mastery of the western landscape depicted so mythically in film and photography, while Robert Bechtle’s meticulous drawings of San Francisco street intersections offer a contrastingly quietist view of the urban scene.

Finally in The Secrets of Sunset Beach, 1987, by Susan Hiller, from which the exhibition takes its title, Hiller’s photographs suggest mystery and ineffability, as automatic writing plays over the dappled and shadowed surfaces of a rented California beach hut.