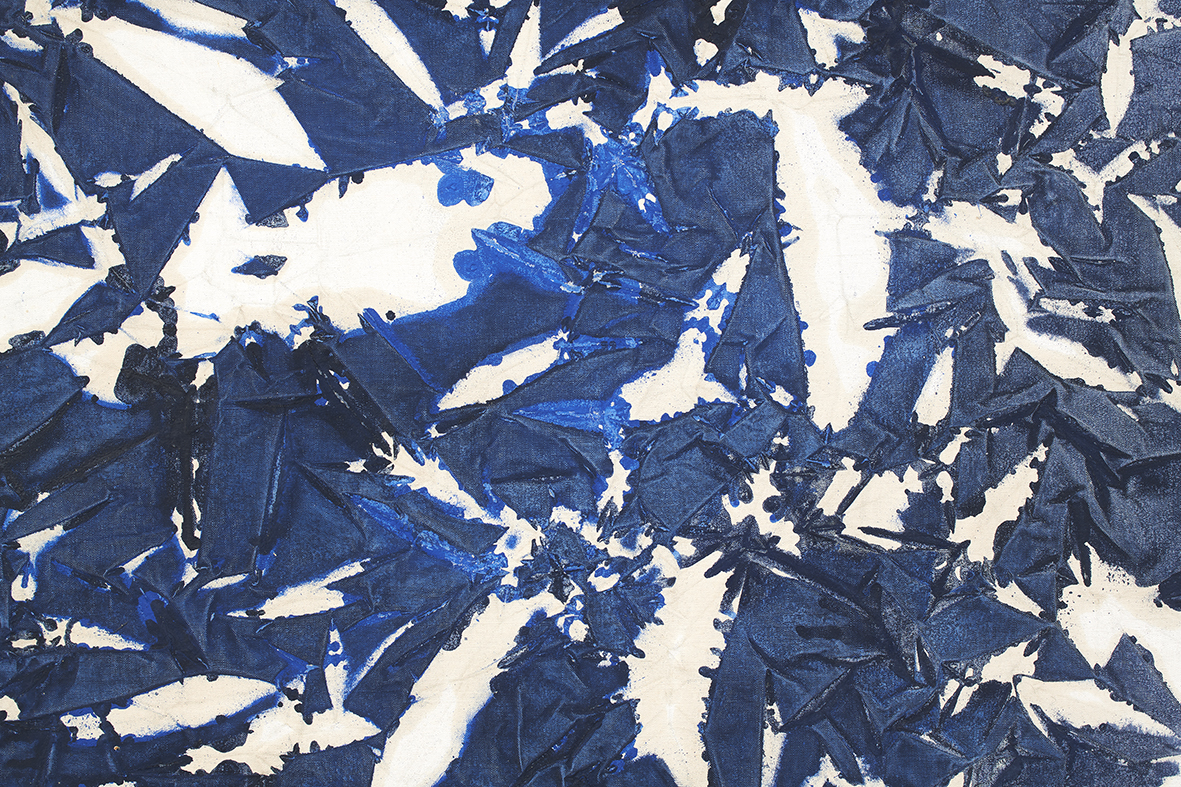 The mature work of Antoni Tàpies, Simon Hantaï and Pierre Soulages finds each artist addressing their materials with determined irreverence. Each in his own way has pushed painting to its sculptural limits: Tàpies with the introduction of sand, cement, marble dust and objects into his painted surfaces; Hantaï in laboriously bundling and folding canvases before approaching them with a brush; Soulages, in using thick oil paint as a material to be moulded and gouged.

Born within a few years of one another – Soulages in Aveyron in 1919, Hantaï near Budapest in 1922, Tàpies in Barcelona in 1923 – they came of age as artists amid the poverty and bomb-shattered debris of post war Europe. For each, adolescence and young manhood was accompanied by conflict. The Spanish Civil War started in 1936 as Tàpies turned thirteen years old. The Second World War commenced when Soulages was nineteen: he was mobilised the following year. Demobbed in 1941, he fled one occupied city after another – first Paris, then Montpelier – avoiding deportation to Nazi Germany for Service du travail obligatoire. Hungary remained turbulent in the years after the war, struggling under the influence of the Soviet Union: Hantaï left for Paris in 1948, the year before declaration of the one-party Hungarian People's Republic.
Read more View Simon HantaïView Pierre SoulagesView Antoni Tàpies

Born within a few years of one another – Soulages in Aveyron in 1919, Hantaï near Budapest in 1922, Tàpies in Barcelona in 1923 – they came of age as artists amid the poverty and bomb-shattered debris of post war Europe. For each, adolescence and young manhood was accompanied by conflict. The Spanish Civil War started in 1936 as Tàpies turned thirteen years old. The Second World War commenced when Soulages was nineteen: he was mobilised the following year. Demobbed in 1941, he fled one occupied city after another – first Paris, then Montpelier – avoiding deportation to Nazi Germany for Service du travail obligatoire. Hungary remained turbulent in the years after the war, struggling under the influence of the Soviet Union: Hantaï left for Paris in 1948, the year before declaration of the one-party Hungarian People's Republic.

The intensity and resourcefulness with which each artist approaches materials seems bourn from their experience of imminent threat and privation: a determination to wring the ultimate expression from whatever was at hand.

So deeply ingrained in Hantaï was reverence even for the humblest materials that one of the artist’s final acts – over a decade after stepping away from the artworld – was the exhibition of his Laissées (‘Leftovers’ or ‘Droppings’, 1994/5.) These small works were excisions from the monumental Tabulas – technical marvels, over five metres wide – he had created for the CAPC Bordeaux in 1981. In the same final burst he also produced Pliages à usage domestique: canvases that he had crumpled and used as if cleaning cloths to sop staining liquids from the floor of his studio.

But we get ahead of ourselves, racing to the end of the story. As a young man in Paris at the sunset of Surrealism, in 1952 Hantaï sought – and was afforded – the attention of André Breton. In 1955 the exhibition Cinquante ans d’art aux États-Unis introduced him first hand to the abstract-expressionist works of Jackson Pollock, which sent Hantaï in radical new directions: not dripping with a stick, but applying thin veils of paint in a scraping action with a piece of circular metal from a clock casing. Built up across large canvases these scraping strokes the artist termed petite touches réveil created a mosaic-like effect that offered a glimpse of marks or densely written text beneath the surface.

The four works shown here are from the most significant period of Hantaï’s career, spanning the length of his experiments with Pliages – canvases folded, crumpled, knotted or masked prior to the application of paint. The Pliages evolved through tightly delineated series, each marked by a shift in technique, three of which are represented here: the early Mariales, the Études, and the later and long-running Tabulas. Commenced in the years following a significant exhibition of Matisse’s cut outs, Hantaï’s Pliages are not only an exercise in painting ‘blind’ and tempting chance, they are also, like the Nus Bleu, explorations of colour cut apart by white space. “The canvas is the scissors for me,[1]” he explained in an interview many years later.

Soulages emerged in the post-war years as the youngest in a wave of Paris-based artists working with abstraction, among them František Kupka, César Domela and Hans Hartung, alongside whom he was selected for the touring exhibition Französische abstrakte malerei in 1949. From the earliest years, Soulages worked with a reduced palette: indigo, walnut, and above all black. In the earliest phase, his paintings and works on paper were dominated by strong, almost calligraphic directional strokes made with a broad brush on white surfaces from which his paintings derived the effect of light.

It was at Soulages’s 1979 exhibition at the Musée National d’Arte Modern – in the newly opened Centre Pompidou – that he exhibited the radical change of direction that has since dominated his career. Working only with black, Soulages started to approach the thick, glossy oil paint itself as a material to be modelled and formed. Rather than being a medium through which a two-dimensional image was communicated, the surface of the paint itself carried the mechanism for a constantly shifting picture of light playing against its own dark surface.

As in his earlier abstract paintings, Soulages turned to repetitive, directional gestures, gouging and scratching marks in the surface of the paint with workmanlike tools found in the hardware shop. He later referred to this radical new technique as outre noir or noir-lumière: ‘beyond black’, or ‘black-light.’ While it may have been black paint that he manipulated on the canvas, light was his ultimate medium. It was one he had the chance to explore from a different direction during the same period in his extraordinary commission for the Romanesque abbey church of Sainte-Foy in Conques, for which he designed 104 leaded glass windows between 1986 and 94. As with his outre noir paintings, the windows at Sainte-Foy carry directional strokes arranged in a strongly rhythmic sequence, the apparently simple patterns modulated from one panel to the next, all dedicated to the contemplation of daylight, and its changing colours and qualities.

Titled, as is Soulages’s habit, only with the dimensions and date of their creation, the four late works shown here exhibit contrasting manipulations of the thick paint to elicit complex performances of light across their surfaces. Just as the apparently colourless windows of Sainte-Foy dress the stone with light now pink, now blue, now yellow, now grey, so the fine abrasions and strong directional gouges ploughed across these paintings produce the effect of varying tones and colours.

The sublime enters the work of Tàpies in less evidently reverential ways: through the inscription of words resonant within Buddhism; through the frequent inclusion of the cross which in one gesture marked his name, marked the spot and marked holy symbolism; through a personal mythology that provided the artist with totems he would return to across his career. Among these totems is the egg – which suggests birth, potential and new life – and the bed, which recalls a period Tàpies spent confined to a sanatorium with a disease of the lungs between 1940 and 1943.

Like Hantaï, as a young artist Tàpies was influenced by Dada, and the work of surrealist artists he had encountered in the pages of art publications such as D’ací i d’allà. Traces of Dada endured in Tàpies’s devotion to everyday materials including sand, marble dust, scrap wood, cardboard and chickenwire. From as early as 1945, he experimented with thickening paint, destroying the illusion of a surfaceless picture by the introduction of textured matter. It was a technique he was to return to and explore more fully a decade later, building up, scratching and gouging into the thickened matter to create an effect that Lawrence Alloway described as “semi sculptural.”

Tàpies himself designated his free standing works “three-dimensional objects” rather than permitting a clear distinction between painting and sculpture. All were only objects, caught as though in a brief still moment within a sequence of events. Two works here – Safata amb creu I corda (Tray with Cross and Rope, 1996) and Ventall i ous (Fan and Eggs, 1996) – while from a later period in which he cast his everyday materials in bronze, are still alert with possibilities, the eggs apparently blowing off the fan on an air current, the rope coiled ominous on its way to god knows what unholy assignation.

In 1981, Tàpies moved away from assemblage and commenced a period of experimentation with ceramics. With characteristic iconoclasm the first material he turned to was fireclay, a coarse, durable industrial material from which the supporting bricks inside the kiln itself are constructed: it’s a material that suggests nothing more eloquently than the method of its own production. Tàpies produced his first work in fireclay in 1981, and his first full ceramic sculpture in 1983. Blind firing in a kiln, and the colouring effects of different methods appealed to his love of happenstance, as did the dribbling of vitreous enamel. In 1986 he staged an important exhibition at Montmajour Abbey in Arles – in which the monumental works included Llit obert (Open Bed, 1986) – which established him as a ceramic artist.

Starting their careers in a period when focus was turning away from Europe and toward ideas and experiments from the USA, Tàpies, Hantaï and Soulages nevertheless broke new ground for European art in the latter half of the twentieth-century. While working within the realms of abstraction, or with found objects and materials, there is something distinctly, importantly, personal in their acts of creation. In the work of each are elements that still linger from experience of Europe in wartime and its shaken aftermath: the embrace of circumstance, an anti-elitism, something indefatigable.
Mailing List
Enquire