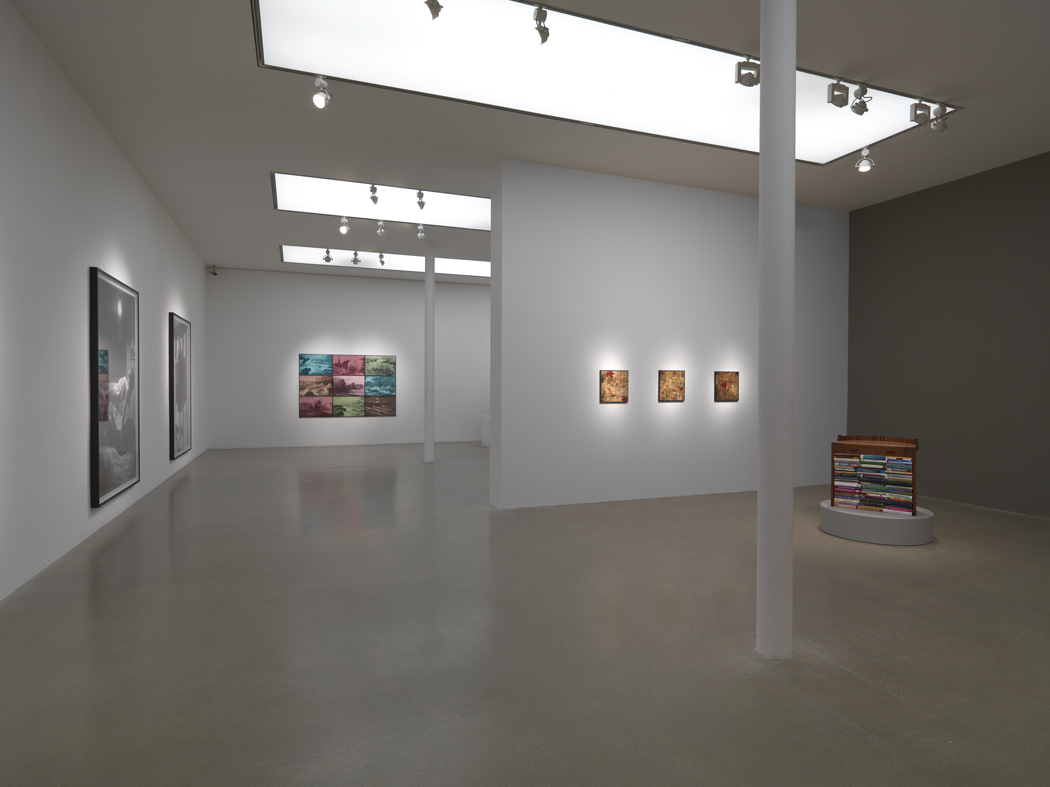 Timothy Taylor Gallery is proud to announce an exhibition of new work by the internationally renowned artist Susan Hiller.

Emerging in the early 1970s, after initially studying as an anthropologist, Hiller is now one of the most influential artists of her generation. Hiller’s output has taken many different forms, and frequently derives from a process of collecting, cataloguing, restaging, and transforming cultural artifacts and experiences as a means of exploring the subconscious and unconscious mind.

An Ongoing Investigation takes as its focus Hiller’s series of works made as homages to different influential art historical figures from the 20th Century including Joseph Beuys, Marcel Duchamp and Yves Klein. Combining conceptual and minimalist strategies and aesthetics with the influence of feminism, popular culture and psychoanalysis, Hiller creates works in a diverse range of media including sculpture, photography, and installation.

In her latest sculptural installation, Homage to Gertrude Stein (2010), Hiller uses a vintage desk as a literary reliquary. Referencing Stein’s interests in automatic writing, the artist has stacked a collection of books relating to the subject, filling the underside space of the desk. Hiller herself has employed various forms of automatic writing in her practice for over thirty years and has transposed this method of mark-making onto wallpapers, photography, and canvas. Placed on top of the desk is a binder containing facsimiles of Stein’s postgraduate papers on automatic writing, as well as other texts relevant to both to Stein’s and Hiller’s research in this field. While providing a succinct visual bibliographical guide to Stein’s library, the rounded shape of the table also humorously evokes Stein’s physical proportions.

The exhibition will also feature a number of new aura portrait photographs that form part of Hiller’s ongoing Homage to Marcel Duchamp series. In Duchamp’s 1910 portrait of his friend Dr. Dumouchel, a range of vibrating colours emanate from the contours of the sitter’s body, while a luminous white band radiates from his hands. Hiller considers this a historical manifestation of an aura study in the clairvoyant tradition. In Hiller’s collection of found photographic portraits, the sitters are surrounded by clouds of coloured light that are generated by electronic means. This particular series functions therefore both as a metaphor for contemporary society in the digital age, and as a celebration of the continuing desire of people to experience and record spectral phenomena.

This mapping of Modernism’s ghostly legacy is continued in another group of individual portraits of people levitating which form part of the Homage to Yves Klein series. Alluding to Klein’s iconic and faked photograph Leap into the Void (1960), Hiller views this work and her subsequent found images as part of a tendency in Modern Art to make use of certain mystical or spiritual traditions derided as superstitious by scientific rationalism.

In her ongoing Rough Sea series, Hiller explores the complex relationships between painting and photography that she first identified in her seminal postcard piece Dedicated to the Unknown Artists (1976), a key work on display in Hiller’s Tate Britain survey exhibition. Many of the postcards collected for this work were reproductions of paintings, while others were printed versions of photographs that had been hand-tinted prior to reproduction. The Rough Sea archival pigment prints play out various permutations of these possibilities. Accompanying and relating to this series are several previously unseen Addenda (1976-1986) works, each of which focus on a particular theme or issue exemplified in postcards that the artist continued to acquire after Dedicated to the Unknown Artists had been completed.

The exhibition will also include the final and most ambitious work in Hiller’s Homage to Joseph Beuys series. This wall installation comprises five vintage, felt-lined medicine cabinets, filled with antique glass bottles, containing holy water from numerous springs and wells around the world. In electing to utilize glass vessels, felt, and water, Hiller alludes to the ways in which Beuys made symbolic use of matter-of-fact materials, sacramentalizing everyday activities and storing up energy in prosaic objects or experiences. By collecting water from holy wells or sacred spring, the artist transforms banal tourism into a form of quest or pilgrimage.

Hiller will have a major survey exhibition at Tate Britain (1 February – 15 May 2011) curated by Ann Gallagher. A catalogue will accompany the exhibition with essays by Yve-Alain Bois and Jan Verwoert.